The Piper J3C Cub is often called “the Model T of aviation”. Known for its simplicity, ruggedness, and low price, it was the most popular light airplane of the 1930s and 40s.

Due to its slow cruising speed, the military version of the Cub, called the L-4, operated in the artillery spotting and battlefield observation roles. Equipped with a radio, it could communicate with troops on the ground, advising them how to adjust their fire to hit the target. Similarly, the L-4 was popular with commanders, as they could climb in the rear seat and get a real-time view of how the battle was progressing and where to launch their next attack.

Its ability to take off and land nearly anywhere also enabled the L-4 to perform medical evacuations from the most remote locations all the way up to the front line – saving lives by ensuring injured soldiers received prompt treatment.

The airplane on display was completd as an L-4H on 20 July 1943 and was delivered to the military two days later. In early August it was flown to Camp Rucker in Alabama. It was struck on 15 February 1945 and transferred to the Reconstruction Finance Corporation for sale.

Restored by Patrick McGuiness, a pilot for American Financial Group, it was donated to the museum in 2020 by his grandson David Zitt. 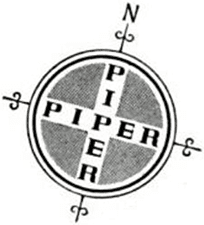